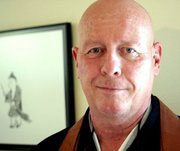 Rev. Eido Bruce Espe is the head priest and teacher at the Des Moines Zen Center. He is also Vice-Abbot of Ryumonji Zen Monastery in Dorchester, Iowa.

Eido was born and raised in a small town in central Iowa. He discovered Zen after serving in the Army and a tour of duty in Vietnam. He has two grown children and two grandchildren. Retired from a career as a hospice nurse, he now devotes his time to his practice as a priest.

Eido is a Soto Zen priest in the lineage of Dainin Katagiri Roshi. In 1997, Eido received ordination. In 2010, he received Dharma transmission from his teacher Shoken Winecoff and completed zuise at Eiheiji Monastery and Sojiji Monastery in Japan.

Use PayPal to Donate To DMZC